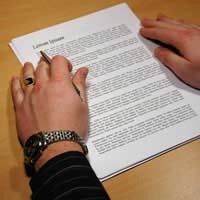 Before even embarking on the script, many writers begin with a treatment: a summary of the action, themes, and style of your movie. This may be up to several pages long, depending how thorough it is. While in some cases interested parties will want to get straight to the finished script, some do request a treatment or synopsis (and invariably a log-line) first. Loglines, synopses, and treatments are designed to generate interest, and give you the option of doing so before you have even finished writing your script. Also, a treatment can be a useful means to work out your ideas, characters, story, structure, and themes, before putting pen to paper.

A treatment is generally more inclusive than a synopsis (which condenses the story into a few paragraphs), and also more dramatic. Its purpose is to create curiosity and enthusiasm for your script while describing the basic elements: leading characters, key scenes, overall storyline, mood, tone and/or genre of the piece, and any themes to be developed or explored. Unlike the script itself, which should be prosaic to a fault, a certain amount of poetic or colourful prose is permitted, even recommended, in a treatment, in order to make it more "persuasive." While your screenplay should limit itself to describing in simple terms what needs to be shot, a treatment is allowed to speculate (or fantasize) about how the finished movie might look, to discuss the overall effect you are shooting for, and to dramatize, not just describe, the action. This is mostly a matter of taste, however; some treatments are just highly detailed synopses.

A synopsis generally implies something much shorter than the average treatment, probably a page at the most. (Never underestimate movie people's distaste for reading things.) Unless you have written an extremely basic script (i.e., Clerks, Stranger Than Paradise), a synopsis will have to omit most of the action and focus on the main points. For this reason, some screenwriters find composing a synopsis more taxing than writing the original script. Imagine trying to sum up the plot of The Godfather or The Matrix in a couple of paragraphs! Economy of language and description is something that comes more easily to advertisers than to writers, who naturally tend towards volume and eloquence rather than terseness and economy. But it can be a useful exercise to sum up your script in a handful of phrases. Being forced to focus on what is integral to story and theme can help draw out the essence of your piece and place it into a new perspective.

Since you can't describe the whole plot in two paragraphs, you will need to emphasize what constitutes the main thread, the story arc that takes audiences through your movie, and the ways in which this arc develops the main characters and the intended theme (assuming there is one). With The Matrix, for example, it might be easiest to focus on the journey of the main character, Thomas Anderson, as he discovers the truth of his situation (that he is living inside a computer program, his real body is being drained of energy by machines), and claims his power as The One. Everything else would be delegated to secondary or peripheral importance, and excluded from the synopsis.

Finally, the logline, as the shortest, most concise summary of all, may prove the most difficult to realize to your satisfaction. A logline is solely for "selling" purposes: a couple of well-chosen lines used to "pitch" your script to prospective buyers. Try to avoid the Hollywood cliché of "X movie meets Y movie," unless you feel you can genuinely encapsulate the spirit of your movie this way. Think about what inspired you to write your script, what you most like about it, and what makes it stand out from other movies.

With all of these forms-treatment, synopsis, and logline- you will want to focus on those elements that are most exciting, challenging, intriguing and original in your script, taking care to place them in a context (that of genre, for example) that is both familiar and accessible to the reader, so reassuring them that your script is "marketable." At the bottom line of every movie deal, after all, is the dollar sign.