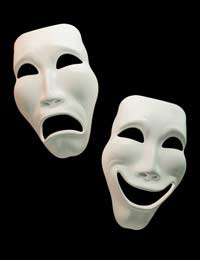 When you're writing scripts, a lot of the advice you receive will focus on how you can make characters, dialogue, plots and so forth more realistic. But realism isn't the only style appropriate to plays, TV programmes and films, nor is it always the best. How can you decide on the approach that best fits the story you have to tell? Just what are the other options, and how can you make them work with your own individual style?

How Real is it Anyway?

Before you work yourself into exhaustion trying to make your work realistic, it's worth asking yourself how realistic the situation you're portraying really is. Most scripts are built around an unusual event of some kind - that's what makes them interesting. Most of what people do in real life really isn't that interesting. It's the stuff of what, in the 1960s, were known as 'kitchen sink dramas', grim and predictable.

Of course, unusual events do happen from time to time in real life, and it's quite possible to portray them realistically. However doing so can limit your options a lot, particularly with regard to how time is presented in your script, because most dramatic events - and people's responses to them - take a long time to unfold in real life.

The other big problem with adhering to realism is that the media of stage, screen and television can distort audience perceptions so that what's presented in a realistic way doesn't seem true-to-life. The ways we expect people to live and behave are conditioned partly by what we see in the media, as well as by what we see in the real world. To be taken seriously, a writer needs to be able to take account of this.

Once you stop focusing on being realistic, it can become easier both to create dramatic situations and to explore the complexities of human behaviour. For instance, imagine that one of your characters has been bereaved and you want to explore their responses. To do this realistically, looking at the natural stages of grief, you would have to set your story across several years. By compressing the experience, you can make your audience more aware of the changes involved in the process.

Moving away from realism can enable you to make adjustments to the mood of your script, whether you're creating comedy or intensifying drama. You can do it subtly, so that audiences are not aware of it unless they're looking for it, or you can take it to extremes to create a dream-like atmosphere. If you're interested in the latter, think about the ways in which dreams can hold your attention and make you think about things.

When you move away from realism, it's useful to pay more attention to other ways of conveying meaning, such as symbolism. You can draw on existing cultural symbolism such as, say, the association of flowers with romance), or you can create your own. Think about what different objects and situations might mean to your characters. Repeated connections can be used to remind the audience of particular ideas or moods.

Whatever kind of script you're writing, it's important to choose the right tool for the job. When should you prioritise realism and when is it better to take advantage of other possibilities?

Realism is generally the preferred tool when dealing with serious social subjects, especially those likely to provoke strong feelings in the audience. There are some subjects that audiences feel it's inappropriate to distort or embellish in any way. However in these situations you'll need to think about their perceptions as well as about what you see as a realistic approach.

Deprioritising realism is a good idea if you want to write a more energetic script or if you deliberately want to create unlikely situations in order to make your audience reassess their underlying expectations or prejudices about a particular subject.

Whatever strategy you choose, being aware of the constraints of realism and the options at your disposal can help to make you a stronger and more inventive writer.