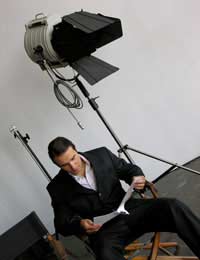 Every screenplay begins with an idea, known in the business as "the concept." It is well-known that the script that "sells" best is one that can be pitched in two sentences or less, i.e., summed up in simple, visceral terms that appeal to people with short attention spans. This form of mental short-hand may be rooted in the marketplace, but it is also based on the fact that movies, to have mass appeal, must be aimed at the senses rather than the intellect (though the best movies satisfy both).

A scriptwriter's challenge is to tell a story in images. The most polished and perfect script is only a blueprint, a departure point, the acorn from which an oak may (or may not) grow. Its only value is in its potential. A screenplay is a work in progress; if it reads like a finished product, it is likely to stay that way. It is often remarked in Hollywood that any script that reads like a novel will never make a great movie.

The standard pitch in the movie business these days is to describe your screenplay in terms of previous movies, preferably hits. "It's Dracula meets Bonnie and Clyde" (Near Dark), or "Invasion of the Body Snatchers meets The Breakfast Club" (The Faculty), and so on. A scriptwriter should never confuse the pitch with the product, however. Such punchy encapsulations may work well enough on studio executives, but they are the death of a writer's inspiration. There is a world of difference between contriving to imitate someone else's ideas and conceiving your own.

A painter may start to paint with no clear idea of what he or she will end up with. Likewise, a novelist may not know what the book is really about until halfway through it. As a scriptwriter, however, chances are you will need a good, clear concept of the work as a whole before you can even begin to write it. Screenplays more or less demand from the get-go a tight (though not rigid) structure of beginning, middle, and end. The primary reason is that scripts are strictly limited in length; anything over 110 pages generally won't be accepted. If you don't know how your story is going to unfold, you run the risk of winding up with a 300-page epic no one will ever read, much less produce.

The seed of a good screenplay can be anything at all: a scene, a theme, a character, a situation, an image, or all of the above. David Lynch's script for Blue Velvet began with the idea of a young man sneaking into a woman's apartment, hiding in her closet to watch her undress, and there glimpsing the clue to a mystery. This became a central motif of the movie, and even wound up on the publicity posters. Ideas, like images, emerge from the unconscious mind. If sufficiently strong, they can take hold of the conscious mind and "inspire" it to develop them further.

When trying to come up with an idea for a script-since there is no way to go into the place of ideas and shop around-it pays to allow ideas to bubble up freely, to observe which way they lead, what images, themes, and scenarios they connect to (if any), and above all how much they excite you. Like seeds, not all ideas are good ones, and not all of them are going to take root, much less bear fruit. But a good seed takes root almost at once, and while a novelist may spend up to ten years on a single book, some scriptwriters are able to throw off a first draft in as little as a week.

Here are some of the more basic "launch pads" for commencing work on a script:

Script Writing: Realism or Alternate Strategies
Share Your Story, Join the Discussion or Seek Advice..
Pls I used a image for my gig on fiverr hope that did not just offend? I found the image on google images and I used it, pls pardon me. Pls can you teach me how to write, lime animation script.
4christ - 21-May-20 @ 5:55 PM
Am bless with this power of imagination words pops into my heads freely I think it is my own gift from nature but am faced with life challenges and I can't sit down to put the stories in my head into writing pleas I need help
Gee - 20-Mar-19 @ 4:28 PM
Title:
(never shown)
Firstname:
(never shown)
Surname:
(never shown)
Email:
(never shown)
Nickname:
(shown)
Comment:
Validate: