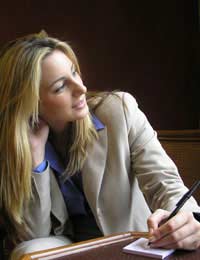 As an author of fiction, you are expected to know your characters inside and out before you ever start writing. So why not use some creative ways to find out more about the people whose lives you'll be detailing? Try some of these tricks and wow your readers with your "pop off the page" descriptions of characters who seem more real than the people they encounter every day.

Step One: Cut and Paste

Have you been unable to put together a good mental image of your character? Then start perusing the magazines and newspapers around your house or check the Internet for photos of individuals. See which ones resonate with how you expect your character to look. Then, cut or print out the photos. Tape them onto a large piece of cardboard and watch as your character's image comes to life.

Though this may seem like a child's game, it's an effective way to help wrap your brain around your character's appearance. Once finished, you can use your photo amalgamation creation to help as you further flesh out your character.

Now that you have an image of your character, it's time to write down some pertinent facts about him or her. Where did he grow up? Did she go to college? What are his favourite hobbies? What is her greatest fear? What television show does he never miss? As you answer these questions, you'll begin to get a very well-rounded view of who this character is. And you may be surprised with what your mind creates.

You can use this "cheat sheet" when you begin to write your story, referring back to it or adding to it as necessary. It will be enormously helpful, as this "resume" allows you to give needed depth and realism to a fictional child or adult.

Step Three: Walk a Mile in His or Her Moccasins

Once you have developed a visual image and background for your character, it's time for you to "try on" the character. On your weekly errands or during your day to day activities, ask yourself, "What would my character do in this situation?" For instance, how might he react while stuck in traffic or when observing a toddler crying in his mother's arms? Would he be moved? Angry? Oblivious?

By putting yourself in the shoes of your character, you'll be able to write about him or her with an accuracy that keeps your readers turning the pages of your novel or short story. Don't forget to record anything that you discover about your character during this exercise; that way, you can use your findings when you begin to write.

Now comes the part you've been waiting for - it's time to start writing about this character that (hopefully) has become as real to you as your next-door neighbor. As you begin to put your story together, stay as true as possible to the character you've developed, even if you find that you don't really like him or her. (Sometimes, we want to force our characters to respond as we might in a similar situation; resist this temptation and allow your character to be who he or she is.)

Keep all your notes handy, and refer back to them often as you put your story together. You'll be surprised at how much easier it will be to concentrate on your plot once your character is already fleshed out. In fact, you might just find that your next story virtually writes itself.

Writing Pitfalls
Share Your Story, Join the Discussion or Seek Advice..
Leda thas so true! i love this site!!!!
birdy - 20-Jun-14 @ 4:44 AM
When searching for anything in particular (such as character or plotdevelopment) one encounters the sale of various books, which always seems incomplete and not what you need), or/and a very short article on 1 aspect of writing at a time, with no examples for instance, no alternative tips, no something that gets you going. Lots of 'conventional' tips, and not much else. This is no criticism of your article, which is the best I have found amongst the many so far read on the internet, and the only one asking for a feedback. But everything is always too skimpy, as if to say,'Follow these main rules and off you go and you are fit to start writing'. Isn't there anything else? Of course you cannot provide the creativity needed, but the paucity of information is what one notices more than anything. I have frequented 2 courses (in colleges) but there one encounters similar problems in addition to teachers tending not to say openly what one's mistakes are and opening them for discussion. The same for anyone's else writing, as if afraid to lose students by telling them the truth. Often one hears the teacher saying 'I like it very much. I think it's very sensitive, though you could improve on ... (and whatever else)', when other people present think 'How could he/she like that plain nonsensical rubbish'. So your trust ends there. Thank you for listening and for offering a way to give an honest opinion.
Leda - 7-Dec-13 @ 1:40 PM
Title:
(never shown)
Firstname:
(never shown)
Surname:
(never shown)
Email:
(never shown)
Nickname:
(shown)
Comment:
Validate: