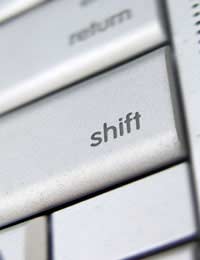 Did you enjoy straightforward lectures in school, or did you prefer hands-on activities? If you're like most people, the latter was much more enjoyable because you were part of the action.

As an author, it's important to sometimes bring your readers "into the action", too. They have to be able to feel your characters' emotions and fully understand the adventures (or even mundane tasks) contained within your fictional piece.

Though there is nothing wrong with telling your audience what's happening, it's usually better to show them through literary hints and descriptions. That way, they can become steeped (or even lost) in the moments.

For example, consider the difference between these two paragraphs. Both describe the same event, but the first tells the audience what's happening, while the second shows him or her instead.

The second example brings the reader into the scene rather than simply telling the story. Though both examples basically contain the same facts (two kids hiding from another one), the latter invites the reader to become more emotionally involved.

As in the two paragraphs above, "showing" often involves the use of imagery (as in the cap and skirt peeking out from behind the tree.) The audience is expected to participate in the experience, not simply read about it. Readers must also sometimes interpret scenarios when they are shown rather than told what's occurring (as in the case of the second paragraph, where it's not explicitly noted that Patrick and Elizabeth are hiding from Charles.)

Furthermore, when you tell someone a story, you are not asking him or her to contribute to the experience. Like storytellers who spin yarns out of air but do not expect to be interrupted with questions, some authors simply prefer to explain to their audiences what's going on. For them, it's more important that the readers have every fact placed before them. Conversely, those writers who write in a more "showing" manner may not always give away all the information to their readers; thus, they simply offer clues to help the reader draw his or her own conclusion.

So… are you a "show-er" or a "tell-er"? It's likely you're a little of both, as most professional fiction writers use both styles at some point. Truly, neither showing nor telling is better than the other. They are equally useful techniques, and their differences are subtle but nonetheless distinct.

Be creative and play around with both types of writing when putting together your work of fiction. You might even want to challenge yourself to write a piece in a "show" style, and then rework it into a "tell" one. It's a great way to learn more about the process of showing versus telling, not to mention exercise your brain and prepare you for a day of penning a new creation.