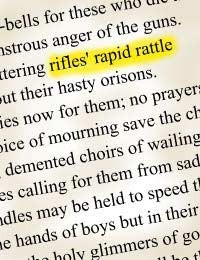 If you've only recently started writing poems, it's probable that your main stylistic concern is how they rhyme. But rhyme isn't the only thing that can make a poem sound good - in fact, it's not strictly necessary, and many traditional styles of poetry ignore it. What matters in giving a poem structure is the way you link sounds, and there are other ways of doing that, two of the most significant being alliteration and assonance.

Alliteration is the pairing of identical or similar consonant sounds. You might be most familiar with this from tongue-twisters such as 'Peter Piper picked a peck of pickled peppers', in which the 'p' sound is repeated. Bear in mind that this sound does not always have to be represented by the same letter - for instance, you might pair sounds made by 'f' and 'ph'. If you can't find an appropriate word beginning with an identical sound, you might settle for a pair like 'f' and 'th'.

Alliteration is commonly used in prose writing, for instance in newspaper headlines that are intended to be memorable. Used too intensively, it can create a comic effect, but you can use that too to your advantage, to amuse the reader. When you use a lot of alliteration, it's important to get a balance between playfulness and seeming to be clever for the sake of it. Try to use devices like this only when you are doing so for a reason.

Despite the example given above, alliteration doesn't depend on particular sounds being at the start of words, though usually they are in a stressed position (like, for example, the 'c' in 'implication'). Some sounds carry particular cultural associations that you can manipulate to add depth to your poem. If you're familiar with 'The Lord of the Rings', think about how Gollum uses extra 's' sounds, making him seem creepy and untrustworthy.

The counterpart of alliteration, assonance is the pairing of vowel sounds. There's an example of assonance in the title of this page - note the 'a' sound at the start of 'alliteration' and of 'assonance'. This has a subtler effect than alliteration, and often operates at a subconscious level. It can be one of those factors that makes us decide that a particular pair of words sound good together.

Vowel sounds can be grouped into high and low sounds, depending on where the tongue is in the mouth when they're produced. For instance, 'i' in 'fish' is high, whilst 'u' in 'tub' is low. Often assonant effects are produced in poetry by grouping a lot of high vowels or a lot of low vowels.

Most English speakers subconsciously associate high vowels with light, elegant or sophisticated things, and low vowels with crude or common things, because of the way they have appeared historically in the language. You can take advantage of this to establish the tone of a poem.

The primary use of alliteration and assonance in poetry is to direct attention to particular words, making them stand out and making them more memorable. By doing this, you can also lead readers to make associations between words. For instance, in traditional heroic poetry, poets often use a lot of positive words starting with the hero's initial and negative ones starting with the villain's initial.

Being aware of the effects of alliteration and assonance also means that you can avoid using them accidentally, which can distract readers from the intended flow of a poem. Read your poetry aloud after finishing your first draft and think carefully about the different sounds within it. Do they direct attention where you want it to go, or do they misdirect it?

Careful use of alliteration and assonance can help to establish Rhythm within a Poem (or in prose). Many traditional forms of poetry use this instead of rhyme, and Rhyming Poems often employ alliterative devices to make their rhythm more complex. This works because of the way the reader's attention is directed to certain sounds, affecting which words are naturally stressed.

One of the most famous alliterative poems in English is 'The Raven' by Edgar Allen Poe, in which paired sounds contribute strongly to the rhythm. Poe uses these sounds onomatopoeically - that is, to mirror the sound he's describing, that of tapping at a door. Try to think about your own poetry in this light. Alliteration and assonance can help you adjust the rhythm to create particular effects.

Alliteration and assonance can seem complicated at first, but they're well worth exploring. They can bring a whole new dimension to your work.

Importance of Rhythm and Flow