Importance of Rhythm and Flow 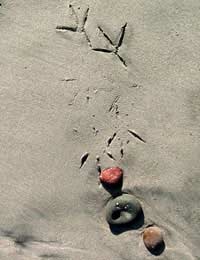 Dancers and poets have a lot in common. They both need to have a great sense of rhythm and flow; without those elements, a dance routine would look wooden and pitiable, and a poem would read as unnatural and tedious.

Don't confuse rhythm with rhyme - the two have little to do with one another. Rhythm is the flow or cadence of the writing; rhyme is a literary device that's used within the poem. And whether a poem rhymes or not, a lack of rhythm can be disastrous.

As a poet, you want to ensure that the flow of your words is natural; otherwise, your readers will find themselves concentrating more on trying to read the poem than on effortlessly enjoying it. One of the best ways to do this as a writer is to be willing to rewrite pieces until the poetry flows as fluently as possible.

For instance, take this poem:

Men in bow ties and neckties -
Others wearing ascots and scarves.
All yoked by proper societal customs.

Though the concept of the poem, that neckwear is akin to leashes, is solid, the words simply do not flow. The rhythm is constantly broken by words that don't add to the piece ("others", "all") or are cumbersome to say ("societal customs"). Additionally, the unrestrained alliteration is halting the flow, as forceful consonant sounds make for an unnatural pace.

All in all, it's a difficult poem to read; in fact, it sounds more like an idea than a fully fleshed-out piece of written artwork.

A better way to keep in line with this poem's general idea while appropriately changing the rhythm and tone is as follows:

In this version of the poem, all extraneous words have been eliminated; thus, only the essence of the concept remains. As a result, the poem has a much more natural flow, as one-word lines provide a succinct, smooth rhythm.

In some cases, eliminating words or phrases isn't necessary. In fact, sometimes, substituting one or two words can make or break a poem's flow. Consider this little ditty:

The world of the feline
Is purrfectly sublime.

The author obviously has a humorous bent, but the rhythm, though acceptable, is lacking. By reciting this poem aloud, one immediately realizes that the last word ("sublime") is essentially swallowed, making the end of the piece weak rather than strong.

To remedy this flaw, we'll exchange some words for ones that are similar in meaning but radically alter the rhythm.

Thus, the poem's flow has been restored, and the light tone hasn't been compromised. (As a side note, "phat" is a very new term meaning "cool" or "hip". If you're not familiar with it, ask any teenager for the low down.)

Approach your poetry writing with an open mind and never forget that with a few (sometimes minor) alterations, you can change the rhythm of your works without changing the meaning of the piece. Consequently, your poetry could go from a stiff square dance to a tantalizing tango.

Punctuation and Poetry
Share Your Story, Join the Discussion or Seek Advice..
Can anyone show me please, how to bring flow to this poem- On my way to the morning walk I met a centipede walking leisurely in the park I asked him "Which foot you move first" He stopped on his way Tried hard  but could not decide Leaving him there confused Searching for an answer. I moved on While coming back I saw it still there, Scratching its head I asked it what is the matter dear He said "I was walking before without doubt and confusion Now I cannot decide Which foot to move first And this is the cause Of my strife." It eyed me with disgust and said "Some people Can not take a right move themselves but are busy in creating confusion in others life."
indumukho - 14-Aug-18 @ 11:23 PM
Title:
(never shown)
Firstname:
(never shown)
Surname:
(never shown)
Email:
(never shown)
Nickname:
(shown)
Comment:
Validate: