Home > The Writing Process > The Re-Write 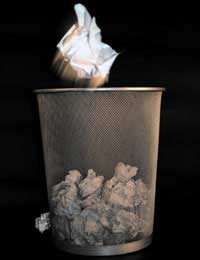 Are You an Ant, a Grasshopper, or a Bee?

You've written your first draft and although it contains kernels of insight, it is in desperate need of an overhaul. It's time to rewrite, but you're not sure how to begin.

Based on your personality, the way you rewrite your works will differ from the methods used by other authors. Check out these styles of rewriting and determine which one resonates with you.

If You Like to Move Systematically From One Task to Another…

You are the type of person who is diligent and hardworking; you usually don't procrastinate on your assignments and you tend to write your pieces from beginning to end, rather than hopping around from the beginning to the end to the middle.

For you to get the most out of the rewriting process, you need to take each paragraph (or series of paragraphs, as the case may be) separately, analysing the tone, grammar, and relevancy. Edit them as you go, but don't forget that they must all flow.

Sometimes, "ant" writers tend to miss the forest for the trees; thus, they pay attention to the specifics but neglect the overall essence of their written works.

You are a "grasshopper".

This type of writer tends to jump from one section of the first draft to another in the process of rewriting. It's not unusual for the "grasshopper" to suddenly become inspired to change the last sentence while reading the second paragraph; consequently, he or she dashes to the end of the document without completely finishing what he or she started.

This author rewrites each article, essay, or chapter differently every time. Depending on his or her mood, the rewriting process for one article may be substantially distinct from that of another. However, it usually all gets finished right before the deadline.

One note - grasshoppers, like ants, cannot lose sight of the overall cadence and relevance of their works. Also, they sometimes, in their hurry to move around, neglect to check and correct spelling, grammar, noun-verb agreement, punctuation and other particulars.

This writer's workspace looks like an explosion took place; only the "bee" knows where everything is and how to find it. Coffee cups mingle with folders, and interviews are written on the backs of napkins and placemats.

This author's style of rewriting is eclectic and seemingly random, though it somehow always seems to get done. The "bee" is like the "grasshopper" in that he or she leaps from one section to another, but even more chaotically.

Thus, this type of writer will sometimes "rewrite" by simply scrapping the entire first draft and writing another one using very little of the original draft. For the "bee", it's easier to create a new piece than to systematically evaluate each sentence or clause, which he or she finds mind-numbingly dull.

One caveat for the bees - don't forget that it's great to have the energy to rewrite your entire first draft, but not if your deadline has already passed. And regardless of whether detailed rewriting and evaluating is boring, it's critical to the rewriting process.

No matter what style of rewriting you choose to employ based on your personality, make sure that you always remember to tackle the basics. And, of course, try to enjoy the process.