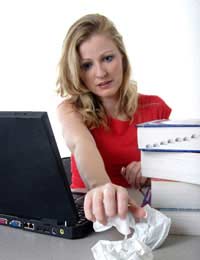 There is an old proverb that says a journey of a thousand miles begins with one step. For writers, that "one step" sometimes feels like a leap across a crocodile pond, especially when faced with writing a first draft.

However, authors needn't trouble themselves over the first draft. Truly, this document is unlike any other because it's meant to be flawed. No editor expects to be handed a first draft; no publisher would likely print it. Instead, the first draft has a magic all its own because it is allowed to be imperfect.

To get started on your first draft, it's critical that you have all your writing tools and information around you. If your piece involved research, be sure that you have all your facts and figures handy. Go through your notes and highlight any quotes you want to include. Surround yourself with everything you need so you won't be tempted to procrastinate.

Once you have surrounded yourself with all you need, you can begin the first draft of your article, essay, short story, or chapter. If you're having difficulty getting started, try jotting down a quick outline, hitting all the "talking points" you don't want to leave out of your work. If you're still lacking the inspiration to put sentences and paragraphs together, type or write some thoughts or ideas onto a page. Just allow yourself to write without limitations; often, the simple act of putting words onto paper or computer screen revs up your brain matter, allowing you to really get started.

When you're ready to begin your first draft, remember that you don't have to start at the beginning of your article or essay. In fact, some authors prefer to write their first drafts "piecemeal", inserting and writing little bits at a time. And there are no rules, so you can do what works best for you.

For instance, let's say that you've figured out the perfect ending for your informative story on modern bridges versus those used in the middle ages. Why not write the ending first? Some authors don't realize the power that they have during the first draft stage; after all, there are no hard and fast rules governing how you must write. Thus, if you're inspired to pen your ending, go for it. Otherwise, your thoughts might escape you, a tragedy for both you and your future readers.

If you'd rather write your narrative or fictional work from beginning to end, allow yourself to quickly put words onto the page, and try not to edit "as you go." Though it might seem difficult not to correct bad grammar or misspelled words, you don't want to lose your rhythm. Besides, you'll be going over your document at least one more time when you revise it during your re-write stage.

During this freeform writing period, relax and concentrate on the essence of your piece rather than on the technicalities. The point of the first draft is to capture the focal points, not to churn out a finished, tightened product.

Similarly, don't be too concerned about word count (if that's a factor) while putting together your first draft. After all, you have enough to concentrate on without wondering if you've gone grossly over or under the stipulated number of words. Instead, know that you can always flesh out or condense your first draft later.

Once you've completed your first draft, put it aside for a little while (if there's time before it's due on someone's desk.) You might even want to start on another writing assignment while your juices are flowing. This way, when you turn back to your first draft, you'll be ready to re-write and edit with fresh eyes.

Above all else, don't limit yourself in your first draft. Be verbose, be creative, be crazy. You can always make alterations later; but you'll never get a second chance to pen a first draft, so enjoy the process.