Home > Getting Paid For Writing > The Rewrite Request 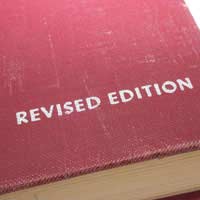 You hand in what you consider to be a polished, final draft to your editor; however, a few days later, he or she requests a rewrite. You suddenly are filled with mixed emotions; after all, you thought your document was finished.

In cases where you're asked to redo a manuscript, you need to focus on the positives of the situation and not the negatives. Often, writers' first thoughts are, "Why wasn't my work good enough?" Instead, the professional author takes control of the situation and moves beyond self-doubt into action.

Below are some steps to take when your editor or supervisor returns your writing with a note calling for a rewrite.

Find Out Exactly What Your Editor Wants

Don't assume that your editor wants a complete rewrite. In fact, don't assume anything. Instead, pick up the phone or send an email asking detailed questions, such as:

By asking for specifics, you won't end up wasting your time (or anyone else's). You may even discover that your editor only needs a small section of the piece rewritten; but you'll never know until you ask.

Resist The Temptation to Argue With Your Editor

We all want to think that we know what's best, but if your editor doesn't agree, try to make every effort to give him or her the product he or she needs. You may disagree on some points (such as whether a quote adds to overall substance of the piece), but choose your battles wisely, especially if this is the first time you're working with this agent, publisher, newspaper, magazine, or website.

If you truly feel that your editor is making a huge mistake by encouraging you to rewrite your article, you may have to accept that you cannot work with him or her. In this case, you always have the option to withdraw your submission and try to sell it elsewhere (if it hasn't been accepted and you're a freelancer), but it's best to at least hear your editor out.

The truth is, rewrites are common in the writing industry. In fact, you may be asked to rewrite your rewrite. Many novice journalists are shocked by this development, but quickly come to realise that it's simply part of the territory.

Just keep in mind that when an editor is asking for a rewrite, it doesn't mean he or she is rejecting you; it's actually quite the opposite. He or she trusts that you will professionally develop a more suitable piece for his or her publication. Consider it a compliment, not a rebuff. Most of all, try to learn more about yourself and stretch your writing acumen in the process.